In less than a weeks time (February 13 in fact), the Cassini spacecraft makes its first very (and only) close pass of Mimas, the innermost of Saturn’s major icy satellites. Like Galileo at Io, Jupiter’s volcanic moon, this inner moon was deferred to late in the missions but for slightly different reasons. Io is deep in Jupiter’s lethal radiation belts and the Io encounters were postponed to minimize damage to the vehicle, and getting down to Io’s orbit also required a lot of orbit reduction. But the mountains and volcanoes of Io did not disappoint and fantastic discoveries were the result. 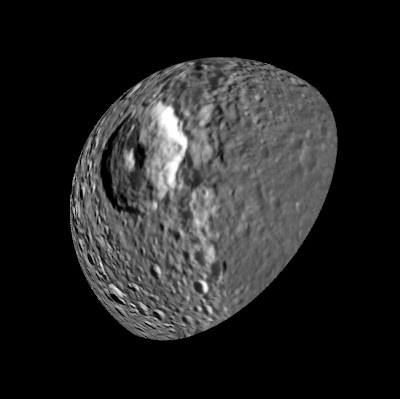 View of Mimas similar to that expected from Cassini, February 2010. The prominent large crater is at left is Herschel, the largest on this small icy moon

Topographic profile across crater Herschel, one of the deepest in the Solar System
Who Cares for Mimas?
Mimas is close to the outer edge of Saturn’s huge ring system and Cassini has not ventured very close, until now. The radiation danger is much lower at Saturn, but Mimas is not Io. Despite being only just a little smaller than crazy Enceladus, with its massive erupting ice plume, Mimas is in fact rather duller. Voyager made Mimas famous when it took the infamous Death Star image showing the large crater Herschel looking much like that battlestar’s large laser dimple. It would be a mistake to disregard Mimas as a cold cratered lump of ice, however. All of Saturn’s other icy moons have betrayed some level of geologic activity in their past. The largest crater Herschel, about 130-140 kilometers across and 11-12 kilometers deep, is one of the deepest in the Solar System. It may also be relatively young, providing an opportunity to study how craters on these icy worlds form and what they might tell us about the interior. Voyager mappers, myself included, saw sets of linear grooves that are most likely extension fractures crosing the globe. Whether these fractures formed when Mimas cooled and expanded or when Herschel knocked Mimas for a loop remains to be determined.  Herschel was potentially large enough to have fractured Mimas throughout. 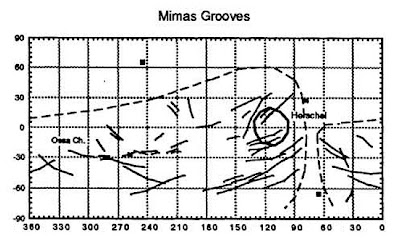 Diminutive Mimas, named after a giant (!) of greek mythology, is only 400 kilometers across. It is also distinctly non-spherical as its polar axis is 10% shorter than the longer equatorial axes. The degree of sphericity could be used to tell whether Mimas has a small rocky core or not (it is otherwise mostly made of ices).  Plus there is something very new (to us at least).   I reported on this in one of my October blogs on this site. It is a lens-shaped deposit of “bluish” “stuff” along the equator of Mimas’ leading (forward-facing) hemisphere. This material appears to coat the cratered surface. We now have an explanation for this feature, and a similar one on Tethys. Unfortunately I can’t tell you the exact answer right now, as this paper has been submitted for review and we should wait until it is approved.  I will post all the details on this phenomenon in a few weeks!

The best current map of Mimas from Cassini. Map resolution is ~400 m and in color

Mimas Soon
What can we expect at Mimas? The Cassini flyby on the 13th occurs near orbit perigee (peri-kronos?) and will be very fast indeed. Although it will pass only 9500 kilometers above the surface, it will have less than an hour or so near closest approach to get the highest resolution images at something like 50-75 meters resolution (our best so far are only 350 meters or so). This should be good enough to get an image or two in which Herschel fills the camera frame. This encounter should thus provide an excellent view of Herschel and fracture systems to the east of the crater. The whole of Mimas will almost fill the wide-angle camera at this time, as well. As Cassini recedes it will likely do global disc mapping of the Herschel side of Mimas, including some of the fractures to the west. It should be an exciting weekend, this being the first good look at a body we haven't yet seen at high resolution.

Rotating Mimas, based on my current global map (shown above)
Posted by Dr. Paul Schenk at 12:09 PM