Triton at +25, Pluto at -1: Twin Planets Separated by Gravity

[An addenda and errata for this post has been uploaded on Aug 23. Click here to go to it and read more.]

It has been quite a long time since my most recent post but it doesn't mean I haven't been busy!  I have been working long hours preparing a new set of global maps of icy moons, the first of which is being released today.  This is the new high-resolution color map of Neptune's large and crazy moon Triton (The next set will be released within a month, and the Galilean Satellite global maps were released in the Atlas of the Galilean Satellites in 2010.)

August 25, 2014 is an interesting date in Solar System exploration.  It is foremost the 25th anniversary of the Voyager 2 encounter with Neptune and Triton.  This was the grand finale of that landmark mission, which over the span of 10 years completed the first exploration of the giant Outer Planets.  It is thus a good day to release the new Triton map.

I was a freshly minted post-doc at JPL in 1989, having arrived the year before.  Having been a summer intern for Voyager Science Support under Dr. Ellis Miner 10 years before during the Voyager 2 Jupiter encounter, and then 2 years later for Saturn, I felt a bond with the mission and its support teams.  Many of these people I know today!  But in 1989 I had no connection with the Project.  Fortunately I knew Bill McKinnon, my thesis advisor, and he knew folks on the Imaging Team.  In the spirit of celebration surrounding the Neptune encounter, the two of us were snuck into the Inner Sanctum in Building 264, third floor, where I had been an intern 10 years before.  (True, 'someone' objected to us being there but we were snuck back in anyway and no one else complained.  It was a grand and special event and [almost] everyone was happy to be part of it and share it with a few colleagues.)

Here are some of the photos (on film!) I took during the Neptune encounter 10 years later . . .
I along with everyone else at JPL in those days was treated to the Voyager Neptune encounter live every day on our closed-circuit TV monitors (this was just a few years before the WWW, cell phones, etc.).  Each day Neptune and Triton got a little bit bigger and more detailed as new images were flashed to the monitors.  The fantastic cloud patterns of deep blue Neptune were fun, but for Triton, we didn't even know how large it was, so everything was new.  It wasn't until a week before encounter that we learned the radius of Triton for the first time.  The surface itself finally became clear only on August 24, the day before closest approach, when Triton's strange features became distinct.   The new map being presented today is the product of those images.

The Voyager Project also published a Travel Guide (before pdf's!) describing the Neptune encounter.  It contains many gems of wisdom and fun facts.  Included are the following quotes from a section in which Voyager 2 leaves a hypothetical diary during its trip out of the Solar System. 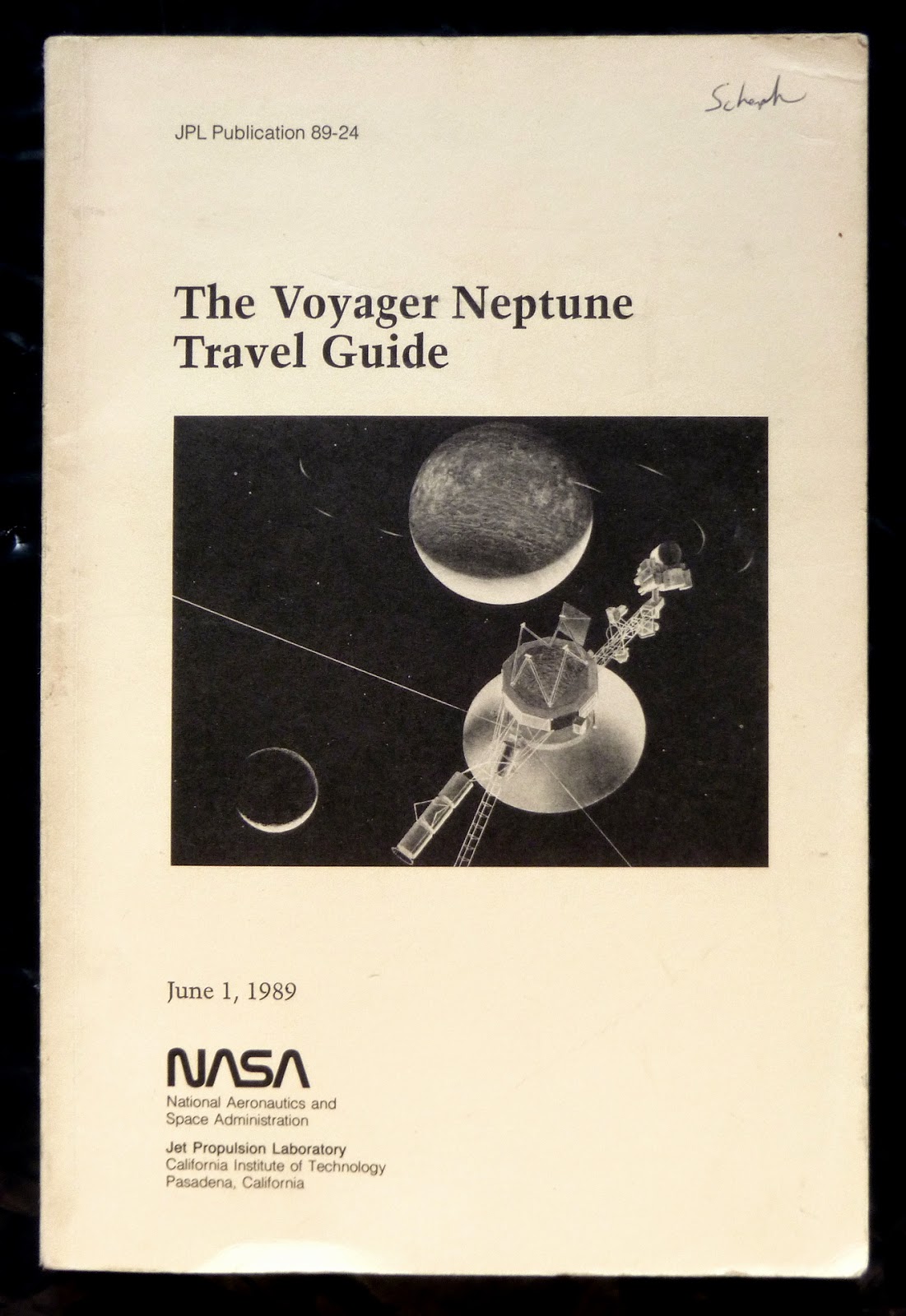 "Star Date -1.259 (1990)  Today I am filled with an intense sorrow.  The encounter with Neptune has ended.  It is a but a tiny star in the background.  Part of my sorrow is from not being able to visit Pluto before my departure, for it is a very mysterious body.  . . .  I wish that I, or my sister spacecraft, had been the one to unveil some of the mysteries of Pluto.  The Project never seriously considered a visit to Pluto because it would have meant foregoing Voyager 1's encounter with Saturn's moon Titan. . . . However, it will be many decades before man will send another spacecraft out to that part of the solar system."  (!)

Like Voyager 'said,' one of the things left undone was the exploration of the trans-Neptunian realm.  Voyager 1 was going too far north, and Voyager 2 too far south.  Other than Pluto itself we had no knowledge of the "Kuiper-Edgeworth Belt" or just Kuiper Belt, until 1992, when the first non-Pluto object was discovered in that zone. Since then hundreds more icy objects have been found.  These objects are smaller than Earth, have icy surface compositions, and extend well beyond Neptune.  New Horizons is the first dedicated exploration of that zone.  It crosses the orbit of Neptune on August 25, 2014, on the same day as the 25th anniversary of Voyager passing Neptune.  It is also now a mere 11 months from Pluto, its main target, which it will reach in mid-July 2015.

In a double sense this is fitting, as Triton is a near twin of Pluto.  Triton and Pluto are both slightly smaller than Earth's Moon, have very thin nitrogen atmospheres, frozen ices on the surface (carbon monoxide, carbon dioxide, methane and nitrogen), and similar bulk composition (a mixture of ices, including water ice, and rock.  Triton however was captured by Neptune long time ago and has been wracked by intense heating ever since.  This has remade its surface into a tortured landscape of overturned layers, volcanism, and erupting geysers.

What will we see at Pluto?  Guesses have ranged from active geology to cold and cratered, so we are in for a suspenseful Summer next year!  Triton is of importance as it offers clues to what geologic features might look like on Pluto, given that the icy crusts of both bodies are probably rather similar and would presumably react in similar ways under internal stress and heat.   So if there were or are volcanoes on Pluto they could look similar to those we see on Triton.

So what does the Triton map show and how was it constructed?  The Triton map was constructed from images acquired in the clear, orange, green and blue filters (ultraviolet filter images were also used and this map will be posted at a later date).  The images were co-registered in an updated control network, which determines where the camera was pointing in each frame with precision so that feature geography is well known.  Photometric adjustment of each image was also done so that shading due to the curvature of the surface can be corrected.  The map also includes the departing crescent imagery, which is apparent in the left hand part of the map.  I hope to post the actual mosaic components in a future post.

Go Here to Find Full Resolution Triton Map and a Movie Recreating 1989 Voyager Flyby (the video is large and may take a few minutes to download):

[A Note on the Use of the Triton Map and Video:  All the Triton maps and videos are in the public domain and may be used freely.  Credit should be notes as:  Triton map produced by Dr. P Schenk, Lunar and Planetary Institute, Houston.  Triton video produced by Dr. P. Schenk and J. Blackwell, Lunar and Planetary Institute, Houston  (or LPI may be used if short form desired).   Use of map and video does not constitute an endorsement of any other product.]

The result is a smooth map showing uniform shading and reasonably accurate brightness and color representation.  Note that the orange filter used by Voyager is not quite the same as our human optical red sensors but is close enough.  Although the map approximates natural colors, there are some uncertainties in the color calibration and  the "true colors" of Triton in 1989 may be slightly different.

In the intervening quarter century and its many discoveries, I think we have tended to forget how strange and exotic Triton really is!  Its effective surface age may be a little as 10 million years, clearly implying that active geology is going on today.  The cantaloupe terrain, which I interpreted back in 1993 as due to crustal overturn (diapirism), hasn't been seen anywhere else.  The volcanic region with its smooth plains and volcanic pits large and small, is  the size of Texas.  And the southern terrains still defy interpretation.

The Triton map also gives a sense of the quality of the Pluto map we hope to get.  The Triton encounter was rather similar to our upcoming Pluto encounter in that New Hoizons will zip through the Pluto system at a high speed, a leisurely 11 kilometers per second compared to 25 km/s for Voyager at Triton, and both bodies rotate rather slowly, ~ 6 days.  This means that for both bodies we will have seen one side well at high resolution and the other side at much lower resolution, roughly 25-to-40 kilometers.  The northern polar regions of Pluto and Charon will also be in darkness as seen by New Horizons, as they were for Triton.

One important difference is that New Horizons carries more powerful remote sensing instruments and will obtain infrared spectroscopy that Voyager, built in the early 1970's, could not.  We should be able to map the distribution of ices across the surface.  We will also resolve features several hundred meters across large areas and as small as ~90 meters in smaller regions of Pluto.  Voyager's best resolution on Triton was ~300 meters in a limited area.  This should be more than enough to map crater distributions, volcanoes, faults, and erosional processes. It will also be sharp enough to see if Pluto has any atmospheric plumes (or geysers) like Voyager saw at Triton.  These can be seen as thin dark and bright streaks on the Triton map.

Producing global maps of Pluto and Charon will take some time as the playback of data from that great distance will be rather slow.  It will take most of next autumn to return all the images and data from Pluto so we will have to be patient.  The end result should be maps of the surfaces of Pluto and Charon even better than we have for Triton.  It will be most interesting to compare Pluto with what we saw at Triton to see if there are any similar features, and to see whether or not Pluto has ever been geologically active.