Mimas Rejoinder: Those Pesky Icy Satellites Between the Rings and Titan

In addition to the Rhea views I released last week (see preceding posts for Blue Streak on Rhea!) to mark the Rhea encounter scheduled for later today, here are some of the other neighboring satellites.  Included is a perspective view of Herschel, the large 140-km-wide 11-12 km deep impact basin on Mimas that lends it the infamous Death Star appearance.  It is based on lower resolution data from 2005-2007 (I would use the newest images but I am expressly forbidden to use Cassini data until it is 1 year old).  Other views include some nbew ones of fractures on Tethys and Dione (Enceladus is extensively covered in older posts).  Enjoy! 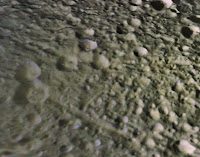 Herschel impact crater on Mimas (left). Herschel is 140 kilometers across and 11-12 kilometers deep, one of the deepest in the Solar System!
The rugged cratered highlands of Mimas (right).  One of this small icy moon's linear grooves, formed when the moon fractured, crosses in the foreground. The largest craters here are about 35 kilometers across.

Cratered highlands and fractures of Tethys (left). The linear fracture valley is part of the giant Ithaca Chasma fracture system. The largest crater here is 45 kilometers across.
Cratered highlands and scarps of Tethys (right). The band of linear scarps is part of the global Ithaca Chasma fracture network and here is about 125 kilometers across.

Craters and fractures of Dione.  The largest crater is 100 kilometers across.  (Here color is topography, blues are low, reds are high)
Posted by Dr. Paul Schenk at 7:50 AM