New Moons - First Global Topographic Maps of (Saturn's) Icy Moons
At the 2010 Div. of Planetary Sciences meeting in Pasadena in October I presented some unique maps of Saturn's icy moons.  Now these are different from the ones showed in 2009 and which are now published in Icarus (Schenk et al., [2010], Icarus, doi:10.1016/j.icarus.2010.08.016, now on-line).  Those were global color maps as part of my persistent efforts to map these moons globally.  These moons are "midsize," not as big as Ganymede or Titan but large enough to be roundish in shape and have some internal geologic history.  They are Mimas, Enceladus, Tethys, Dione, Rhea and Iapetus (Figure 1a).

Figure 1a.  Global color mosaics of the 6 midsize icy satellites of Saturn.  Maps are shown to scale.  Rhea, the largest of these moons, has a diameter of ~1525 km.
So what are these new maps?  These are nearly global topographic maps of these ice-rich moons (except for the north poles), the first true global topographic maps of icy satellites we have ever had.  Until now we haven't been used to seeing icy satellites in this way because the Galileo mission was not able to return global scale mapping mosaics that would have allowed topographic maps of this type (it did return a number of higher resolution local stereo maps which have been used to make the views shown in earlier weblogs!).  Why are these maps important?  Topography directly reflects the geologic history of a world, and reveals the tectonic, volcanic or thermal processes that have modified or altered the interior.  This weblog summarizes those finding, which will be reported on in more detail in a publication Spring 2011.
These maps are derived from medium-resolution (150-2000 m/pixel) stereo images obtained by Cassini (additional high resolution stereo and shape-from-shading (photoclinometry) mapping components have been partially completed and will be added later).  They reveal a wealth of geologic information.  The maps (Figure 1) are first presented to scale, both horizontally and vertically.  Each are shown at 1 km resolution (horizontal) and have been jpeg compressed to show the topography between -5 and +5 km relative to the approximate mean elevation (this is the range which contains roughly 95% of the topography on most of these worlds.

Figure 1a.  Global topographic mosaics of the 6 midsize icy satellites of Saturn.  Maps are shown to similar horizontal and vertical scales.  Topographic range shown is +/-5 km.  North polar areas will be filled in during the ongoing extended Cassini mission.

The presentation of satellite topography at -5 to +5 km in Figure 1b reveals some interesting features.  The most obvious feature is that Iapetus and Enceladus stand out from the others.  Enceladus is very active and has high heat flows, resulting in lo topography generally.  The exceptions are the 100-km-wide dimple-like depressions that Bill McKinnon and myself talked about back in 2009 (Schenk and McKinnon [2009], Gephys. Res. Lett., vol. 36, CiteID L16202).  Iapetus topography, on the other hand, is saturated in Figure 1b because its topographic range is ~ -12 to +12 km, roughly twice that of the other satellites (it is shown at the proper jpeg compression in Figure 2.)  The ancient age of Iapetus and its large deep basins are evident here and have been noted before by others.  But Mimas, Tethys, Dione, and Rhea all have much lower topographic ranges, indicating that if the deep topography seen on Iapetus ever formed on these worlds, it was erased or reset very early on by global thermal heating event(s), followed by the tectonic and cratering record we now see on those surface.  This means that these satellites experienced significant global heat production early on. 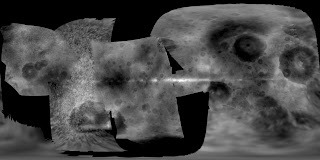 Figure 2.  Global topographic mosaic of Iapetus, icy satellite of Saturn.  Full range of topography is shown.  This map is not as complete as only 2 high-resolution encounters were planned for this satellite by Cassini orbiter.

The story is not the same for each satellite, however.  On Tethys, there are several large craters with relaxed topography (Telemus, for example in Figure 1b), but also a similar number of large deep craters (Odysseus is at least 8 km deep, Figure 3).  On Dione, however, all the large impact basins have experienced significant relaxation.  Evander is similar in relative age to Odysseus and almost the same size yet has been essentially relaxed away (Figure 4), leaving only the rim and central structures.  The implication is that Dione’s thermal heating episode lasted much longer than on Tethys.  Both satellites have smooth plains that may be volcanic reminders of these thermal episodes.  Rhea is different still.  Although there are several large basins on Rhea, they are not as frequent as on Iapetus (which is similar in size) and are half as deep.  Clearly Rhea experienced a lot more thermal heating than Iapetus.  It is not as geologically complex as Dione but also experienced a period of global expansion, forming the network of extensional graben seen in last years Rhea encounter (Figure 5). 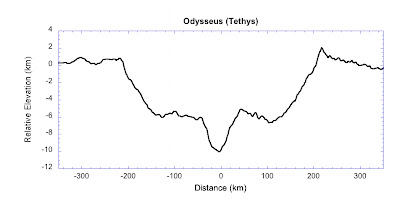 Impact Impact
Internal heating is not the only signature we see on these small icy moons.  2:10 PMhe large impacts so evident in the topography (Figure 1b) also appear to have produced large-scale geologic disturbances.  In the Tethys map, a large 2 to 3 km high ridge extends in an arc due east of the Odysseus impact basin.  East of the ridge (to the right in the maps) we see fairly normal looking cratered terrains, but between the ridge and Odysseus, the texture is dominated by small irregular pits.  This ridge could be a mega-ejecta ridge formed by this enormous basin (a massive computer simulation is currently underway to test this hypothesis).
A second large and very ancient basin can be seen in the center of the trailing hemisphere (left half) of the Dione topography map (Figure 1b).  Radial to this basin are several prominent trenches or gouges that may have been carved when this basin formed long ago.   Radial scour is also evident around Evander basin on Dione.  Numerous radial troughs are also present on Iapetus although the resolution of the topographic maps in those areas is rather poor.  Evidence for seismic shaking on the surface of Mimas may also be present in the form of flattened craters opposite to the location of the large Herschel impact there.  Evidently, large impacts can have a big impact on the geology of these icy moons. (As an aside, I will be looking closely for similar effects when we arrive at Vesta next summer.)  More details about these maps will be shown in future reports. 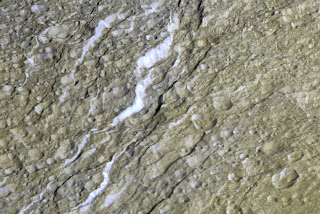 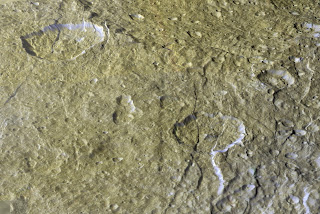 Figure 5.  Perspective views of Rhea’s graben network.  These are located near the center of the moon's trailing hemisphere (the left half of the maps in Fig. 1).  Produced from high-resolution stereo/photoclinometric topographic map of the region.
The Iapetus Story
As shown in Figure 2, the topographic map of Iapetus is incomplete but it does tell us that large impact basisn 8-12 km deep dominate much of the surface. The other main feature is the equatorial ridge.  The surprise here is that the ridge is definitely not continuous.  It has a maximum height of approximately 18 km (final numbers will be posted later), but in other areas is only a few kilometers high and is divided into a series of widely spaced knobs.  These knobs bear a striking resemblance to the blue patches on Rhea, which were also widely spaced along the equator.  These were attributed in our Icarus article late this year to impact on the surface of ring debris (now apparently gone) in orbit around Rhea.  The difference here is that the ring system around Iapetus proposed by Wing Ip was much more massive and accumulated much more debris onto the surface of Iapetus than on Rhea.  The key is that on Rhea we see the bluish deposits prefentially only on one side of the highest standing topography, indicating the accumulation of low-flying debris onto obstacles.  This could easily build the promontories seen on Iapetus.  Sounds like a good target for some enterprising computer particle modelers.
To cite these results, the required citations are:
Schenk, P. (2010) Global Topographic Mapping Of Saturn's Midsize Icy Satellites: System-wide Thermal And Impact Effects, Amer. Astron. Soc., D.P.S. meeting 42, abstr. 9.16.
Schenk, P. (2010) New Moons – First Global Topographic Maps of (Saturn's) Icy Moons,
http://stereomoons.blogspot.com/2010/11/new-moons.html.
Posted by Dr. Paul Schenk at 3:10 PM