The Snows of Enceladus 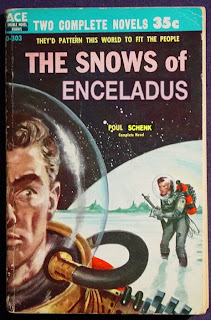 I'm attending an Enceladus Workshop in Mountain View CA today and tomorrow and just finished my official report.  Here is a summary.  It needs a lot of editing but should still gets the basic idea across.
I know snow.  Snow was a constant winter companion growing up in the south Buffalo snow belts, where the average seasonal accumulation exceeded 100 inches and 3 feet could accumulate in a single storm.  So, i think i know snow.  The Solar System offers little opportunity to study snow (the snows on Mars and even Triton today amount to little more than flurries; Pluto awaits).  There is now one major exception to that conclusion: Enceladus.  The large plumes of icy gas and dust from the south pole of that small world discovered by John Spencer and colleagues on the Cassini project give rise to a host of consequences, not least of which is the "painting" of neighboring satellites with E-ring dust (see my earlier postings here on the Saturn moons color topic).  Now it looks like a thick blanket of "snowpack" may be accumulating on its fractured surface. 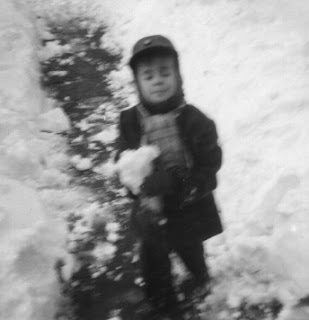 Buffalo NY (1964)
First a definition.  By snow I do not mean large heavy snowflakes familiar to those who live in the Great Lakes snow belts or familiar with Nor'easters or Sierra snowstorms.  The snows of Enceladus are small crystals smaller than a millimeter that slowly fall to the surface from the giant plumes of icy gas and dust jetting from the south pole.  This "snowfall" is hardly noticeable but is persistent and steady.
One of the stories revealed by the global color mapping I did in 2009-2010 of all of Saturn's non-Titan icy satellites (see my postings from last year and my Icarus article in Volume 211, January 2011, Pages 740-757) was that the global color patterns on Enceladus did not match those of the other satellites.  There was a symmetric global pattern with two opposite zones each of bluish and reddish areas,  but the center of that symmetry was offset 40°W compared to that seen on the other moons.  working independently was the team of Sasha Kempf and Jurgen Schmidt and colleagues in Germany who were mapping the fallback of Enceladus' plume particles back onto the surface.   To our mutual delight the predicted deposition and observed color patterns matched surprising well (figure to come).  This appears to be a direct confirmation that significant amounts of plume dust were falling back onto the surface in discrete patterns.  It turns out that by contrast to Mars, Enceladus is caught in a decades-, if not millenia-long blizzard.
So how much plume dust (lets call it "snow") has accumulated on the surface.  The answer has implications for how long the plumes have been active and what is the nature of this moon's cold surface.  The model predicts that the density of accumulated snow is highly variable across the surface, reaching it thickest along the 40° and 220° W longitudes.  Few direct observations are available, except in the form of a single high-resolution image a bit north of the active south polar region.  Topography data are now available over this site, thanks to my particular genius in extracting such data from stereo and photocllinometry.  The image was acquired at 12 meter resolution, good enough to distinguish objects as small as 40 feet across. 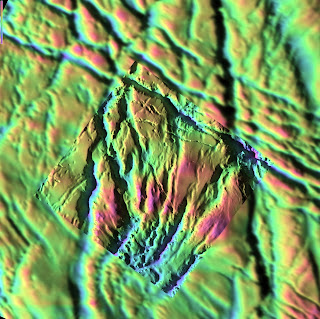 High resolution image (12 meters/pixel) of Enceladus showing a heavily fractured 10-kilometer wide impact crater (bottom center).  In between the numerous fractures are smooth lightly cratered plains.  Fizzy areas are from lower resolution context images.  The color is not natural but rather color-coding of topography (blues are low, reds are high).

The scene has many similarities to terrains covered by a heavy snowfall or indeed ashfall from volcanoes.  Except for the numerous deep fractures crossing the scene, the terrains are surprising flat, with shallow ghost-like remains of older fractures, several pit chains, and rounded scarp edges.  Thick deposits of fine-grained debris (deposited ballistically or from above) such as snow obscures sharp narrow features like street curbs, fire hydrants or small dogs, as any car driver from up north will testify.  This is what we seem to be seeing here.  Our best estimate right now is that the snow deposit here is on the order of 100 to 150 meters thick (less thick elsewhere).  Hopefully, additional images of the surface will be acquired at better than 10 m resolution.  These measurements also has implications for how long the plumes have been active, but these and other details I will have to reveal later after we verify our calculations! 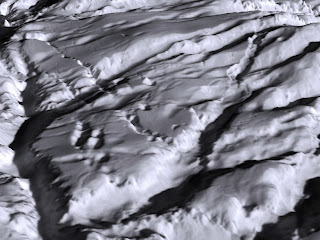 This perspective view was rendered using digital topography of the area generated by the author and is roughly 7 kilometers wide.   Note the rounded scarps of the large fractures and the probable drainage pits on top the smooth plateau at center left.  A fresh sharp edged fracture is visible at upper right.

If correct, then this finding gives us a new insight into what the surface of Enceladus might be like.   First, it is not certain this snowfall would be visible from inside your space helmet standing on the surface, except perhaps as a faint glow in the sky towards the south or the occasional sparkling sun-glint off random descending ice crystals.  There would certainly be no swirling winds (or any wind for that matter), towering snow drifts or the like.   The intensity of the snow fall would be exceedingly light.  The intensity would also differ depending on location.  Near the south polar jets, the falling particles might be more visible, but still not as intense as light flurries.  It is its persistence over many years that gives rise to the tens of if not hundred meters of accumulation.  It is not quite snow as we know it in the temperate climates.  The particles on the surface are expected to be sub-millimeters in size and will likely accumulate in a dense but unconsolidated blanket.  Unlike our terrestrial snow packs, however, the extreme cold temperatures mean the icy crystals won't stick together very easily.  You might be able to kick this snow around a bit.  Traction might be a problem for astronaut and rover alike. 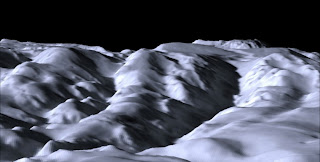 This perspective view of Enceladus was rendered using digital topography of the area generated by the author and is roughly 5 kilometers wide.  It shows the heavily fractured rim of an old 10-kilometer-wide impact crater.
To view the FLYOVER MOVIE these stills are extracted from,
go to The Snows of Enceladus movie.
Posted by Dr. Paul Schenk at 5:18 PM

Your Blog is very informative: