Perhaps the most violent events in a planets history are the impact of a large asteroid or comet on its surface, which leave a record in the form of large depressions.  Europa is no exception, but its dynamic geologic record has erased all but the most recent of these events.  Only two craters have been identified that are larger than 30 kilometers across and both of these are very unusual.  One is Tyre, the other, shown here, is Callanish.

Callanish was observed twice at high resolution by Galileo as mosaics across the center of the crater, but at different times of day.  Normally this difference in lighting (late evening and early morning in this case) would preclude stereo, but it turns out that if you reverse the contrast in one of the mosaics, you get an eerie but very effective stereo pair!  Its a little difficult for the eye to view but the computer can actually make sense of the information (except in the deep shadows cast by the taller ridges).  Why is getting stereo important?  The unusual ringed morphology (there is no crater rim, central peak or other classical feature we expect in a crater this size) indicates that the ice shell of Europa, which is believed to float on a global water ocean, is relatively thin.  Getting a handle on the topography and determining what happened to this crater may help us constrain how thin that shell really is, or rather how deep the ocean lies.  The new topographic map, which combines the stereo map with high-resolution shape-from-shading mapping, shows that there is very little depression at the center of Callanish.  The concentric ridges that surround it can be as high as 200 meters, however.  Total relief across the map area is less than 500 meters.

Callanish is Valhalla-type multiring basin, so-called because the 3000-kilometer wide Valhalla basin (which will someday appear on this blog) was the first discovered.  These basins have up to several dozen concentric rings in the form of ridges or graben fractures, formed in a large impact event if the planetary lithosphere is thin and easily fractured (credit my thesis advisor Bill McKinnon for deducing this!).  The fact that such a small impact crater (nominally only 33 kilometers across, which we deduce in this case fromt he range at which we can identify the numerous small secondary craters that surround it).

The comet that likely formed Callanish was only 3 to 5 kilometers across.  Was it enough to punch through the icy shell and splash out ocean water on the surface?  Probably not, but it came close.  Numerical modeling of cratering in an icy shell like Europa's suggests that the crater was large enough that the ice shell could not support a true crater morphology and collapsed in on itself during excavation, but the ocean was not likely breached directly.  Some water might have gotten mixed in during the event, however, which might explain some of the darker orange coloring of Callanish and its ejecta deposit.

The center of Callanish is relatively flat but also very rugged with a coarsely textured surface.  This texture extends across much of Callanish and is likely refrozen impact melt and debris (composed of water ice in this case).  Numerous short but concentric ridges surround the center, and extend out some distance before changing to depressed fractures, called graben by geologists.  Altogether, this system of ridges and graben have a diameter of 90 kilometers, although the true crater is only 33 km across.  Within and beyond the fracture zone lies a coarsely textured deposit that cover or obscure older terrains.  This is the ejecta deposit, which in turn is surrounded by normal Europa terrains peppered by small secondary craters from Callanish.
The natural color video starts in this outer zone of secondaries, sweeps across the ring system and past the center back to the graben zone, and then back once more across the basin center before coming to an end over the ejecta deposit, which can be seen partly burying older bits of Europa.   The colors shown are based on very low resolution global images and do not unfortunately show much in detail.   The synthetic color video uses the topographic map as an overlay of color, with blues being low and reds being high.  The perspective views shown here a based on these videos. 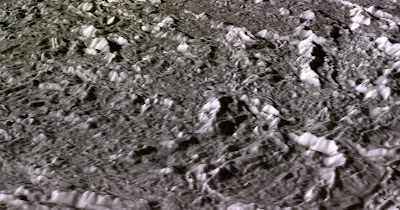 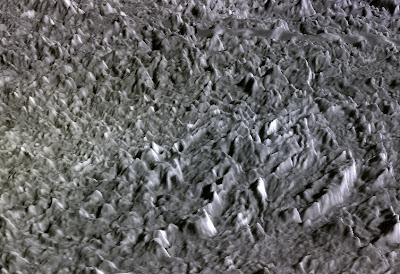 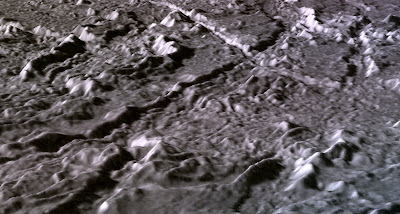 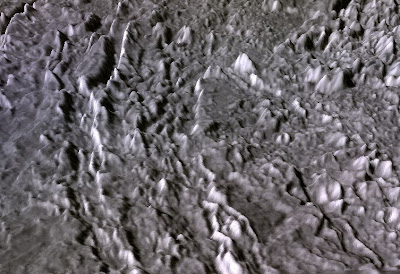 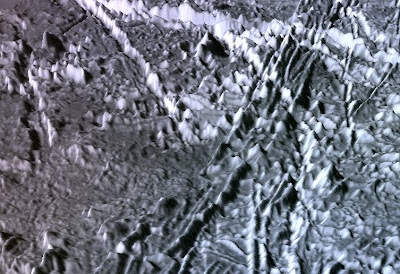 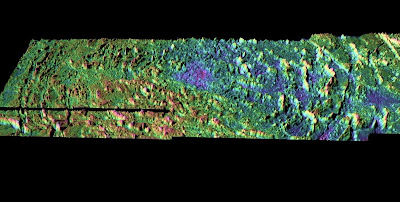 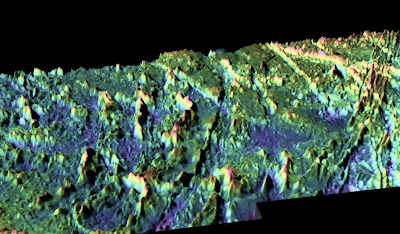 Collision at Callanish: The Movie

Imaging is from Galileo Orbiter.  Topography and rendering by and credited to: Dr. Paul Schenk, Lunar and Planetary Institute, Houston.