After focusing on Europa (and other bodies) for the past few weeks, it is time to show off the rest of Galileo' s four Jovian moons. With the 400th anniversary of Galileo's Jupiter discoveries approaching next January, it is also timely to release 4 movies, one each of Io, Europa, Ganymede and Callisto, four large bodies worthy of the name planets, despite Jupiter's domination. Each data set is different in character. The mosaics used here are from the soon to be published Atlas of the Galilean Satellites (P. Schenk, Cambridge Univ. Press, 2009).

The Io video over Tohil Mons is based on a preliminary topographic map and is in lower resolution than the final data, but it gives a good overview of the entire mountain. The Europa video is based on a a combination of stereo and shape-from-shading and is also in color. Those of Ganymede and Callisto are in grey tone because high-resolution color does not exist for these sites, or indeed most of their surfaces. All are limited by the size of the base mosaics, the result of the failure of Galileo's main antenna, limiting the downlink and the number of images that could be returned. Hence, mosaics tended to be short and narrow, limiting the turning area in which to design such movies. But enough complaining, here are Europa and her siblings.
[NOTE ADDED:  all videos posted here and on YouTube are reformatted for the Iphone/Ipod.  Full resolution versions are 20-40 Mb and can be made available on special request.]

Tohil Mons rises 9 kilometers above the volcanic plains of Io and was a frequent target of Galileo observations. Both stereo and low-Sun imaging were acquired, allowing us to complete both stereo and shape-from-shading maps, which were combined here to produce a detailed topographic map as companion to this 340-meter resolution mosaic. Tohil Mons is one of the most complex of Io's 150 or so large mountains, many of which apparently formed due to global compression and thrust faulting resulting from Io's constant volcanic resurfacing. The video begins south of Tohil Mons. At the center of Tohil Mons lies a deep circular depression, which may have formed by volcanic collapse. Formation of this caldera may be slowly destroying the steep walls of the mountain. The low plateau to the east of the main promontories appears to be slowly collapsing or eroding. To the north we see a circular plateau standing 3 to 4 kilometers high and heavily incised by a number of fault-bounded troughs. The vibrant colors overlapping the northern part of Tohil Mons are sulfur-rich plume deposits from nearby Culann Patera, a volcano with almost no vertical relief. The Galileo cameras were sensitive in the ultraviolet and infrared, providing these enhanced colors. A higher resolution topographic map and video is currently in production. 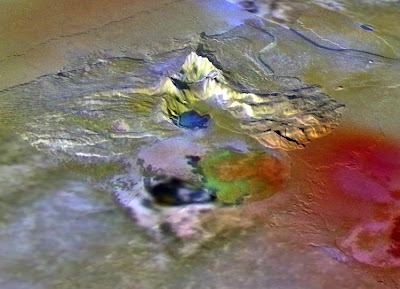 Tohil 1: View from the northeast, across Tohil and Radagast Paterae. Reddish deposits are plume fallout from Culann Patera. 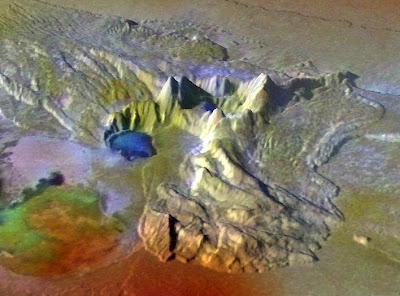 Tohil 2: View from the northwest. The central amphitheatres are dramatically apparent in this view. 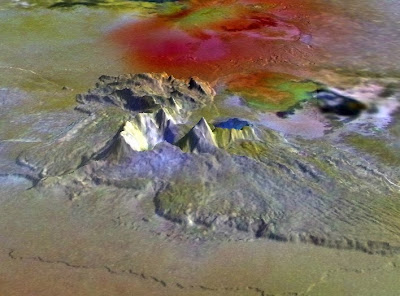 Tohil 3: View from the southeast. The 100 meter high basal scarp along the eastern plateau is visible in the foreground.


The bright band Agenor Linea was one of the more intriguing features seen during Voyager 2's low resolution peak at Europa. Stretching 1400 kilometers across the face of icy Europa, Agenor Linea still mystifies. Mapping of this 9-frame 55 meter resolution Galileo mosaic suggests a combination of strike-slip and compressional faulting, not unlike that on parts of the San Andreas fault system. In this region, Agenor Linea is 20 kilometers across with only a few hundred meters of relief. At several points in the track, we see regions of chaos disruption adjacent to Agenor, highlighted by the radical tilting of ice blocks several kilometers across. Towards the end of the track, we also see several walled depressions cut into the surface of Agenor Linea, formed when parts of the icy shell dropped down.

Agenor 1: A typical section of Agenor, including the elevated margin in the foreground. The color of the band also changes from dark reddish at bottom to brighter at top. 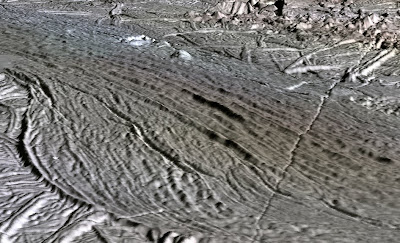 Agenor 2: This is one of the widest parts of Agenor and occurs along a bend in the trace of the lineament. 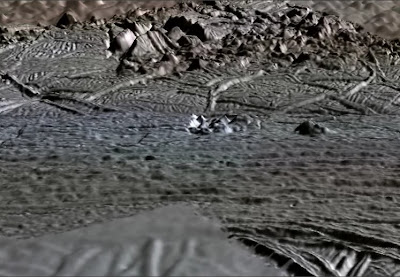 Agenor 3: Agenor Linea lies in the foreground, while a patch of chaos highlighted by tilted blocks and rugged matrix is in the upper right.

This video, based on mosaics obtained during Galileo's 28th orbit of Jupiter, crosses Arbela Sulcus, a narrow lane of bright terrain deep within the ancient cratered terrain of Nicholson Regio on Ganymede. The 4-frame mosaic, at 130 meter resolution, features three major terrain types common to Ganymede. We start over a region of grooved bright terrain, that has been that has been intensely faulted, forming a series of parallel ridges and troughs. The deepest of these troughs or grooves, in the lefthand foreground, is about 600 meters deep. The smaller ridges are typically 100 to 150 meters high. The first large crater is 6 kilometers wide and almost 700 meters deep. As we move forward, the grooved terrain comes to an abrupt end, cut by Arbela Sulcus, which here is 24 kilometers wide. This band of smooth bright terrain is nearly free of faulting and is relatively, though not entirely flat. Subtle fault-lines run parallel to the edges of the band, which most likely formed by the emplacement of now-frozen water lavas across the surface of a downdropped block of older terrain. The video ends over a highly fragmented section of Nicholson Regio proper. This terrain is heavily cratered, very rugged and very ancient. Such terrains cover only approximately 33% of Ganymede today. The narrow troughs are on the order of ~500 m deep and show that parts of ancient dark terrain were heavily fractured without forming bright terrain. The topographic data used to make this video are derived from stereo image analysis, which are not as high in resolution as the final mosaic. 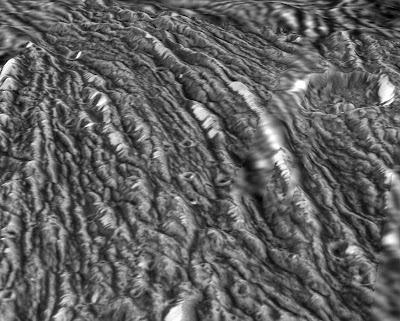 Arbela 1: Ridges and troughs of grooved terrain, west of Arbela Sulcus, Ganymede. Relief across the larger ridges is up to 650 meters. 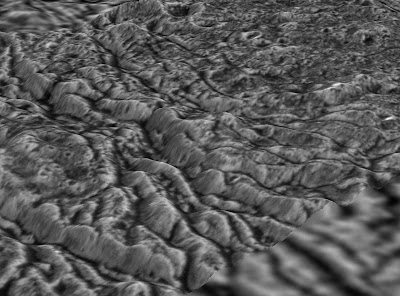 Galileo obtained a 90 meter resolution 12-frame mosaic of the Asgard Basin, extending south from basin center. The video begins at the southern end of this radial mosaic in heavily cratered terrain. Immediately visible in one of the outer concentric rings of this 3000-kilometer wide structure. The outer rings here consist of walled graben or down-dropped troughs, which follow a snake-like path around the center of the basin. Also apparent is the deep erosion that has removed large portions of the graben walls as well as the rims of many craters in this region, leaving a dark surface residue. Despite the erosion, these graben remain at least 1 kilometer deep. As we fly forward we see more craters and additional graben rings. If you look closely you can see small landslide deposits on the floors of some craters. As we fly further north we begin to transition to the inner ring zone, which have the form of ridges rather than graben fractures. Further north, the terrain brightens and is less cratered. This is in fact the outer zone of a large 115-kilometer wide crater Doh, which formed some time after Asgard. At the center of Doh is a 25-kilometer-wide central dome. The surface of the dome is densely fractured, suggesting that it expanded upward as it cooled, cracking the surface. Formation of Doh obscures any features that might have existed at the center of Asgard. No stereo imaging was obtained with this mosaic, all topographic data are based on shape-from-shading techniques. 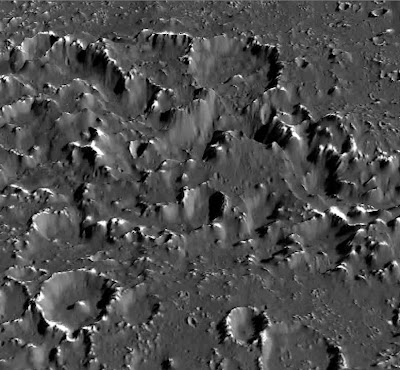 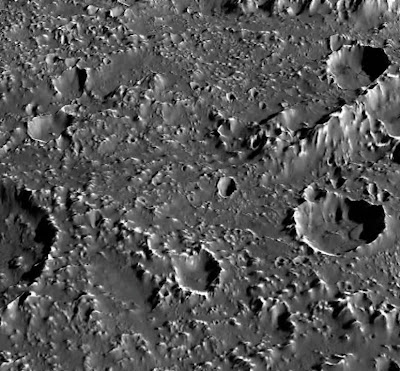 Asgard 2: Eroded Cratered Highlands. A small landslide is seen on the floor of the 1 kilometer deep crater at right. 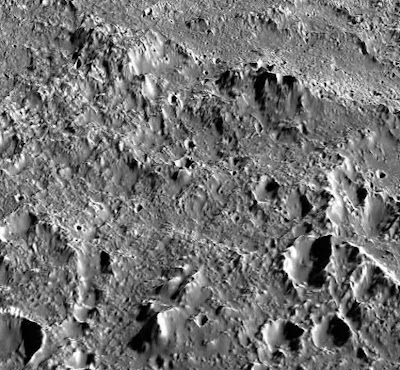 Asgard 3: Inner ring ridge of Asgard impact basin. Hummocky material overlying upper half of the scene is impact ejecta from Asgard and the 115 kilometer-wide Doh crater to the north. 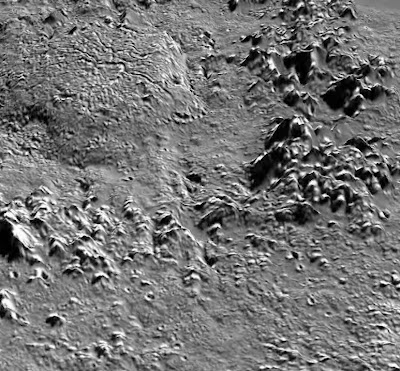 Asgard 4: Central dome and inner ring massif of Doh impact crater. The dome is 25 kilometers across and 1 kilometer high.

This is the firet I have seen these!